The American t shirt has turned 100 this year. First issued to the U.S. Navy to be worn under their uniforms in 1913, the t shirt has become an ubiquitous part of American garb. In fact, a recent Kelton study found that 95 percent of Americans wear t shirts, and 89 percent don’t go a week without wearing one at least once.

But how did we get from underwear to outerwear? The t shirt was made mainstream primarily through adoption by young teens and counterculture movements. Here are some of the defining moments in American t shirt history depicting how the simple garment shaped– and was shaped by– each generation. 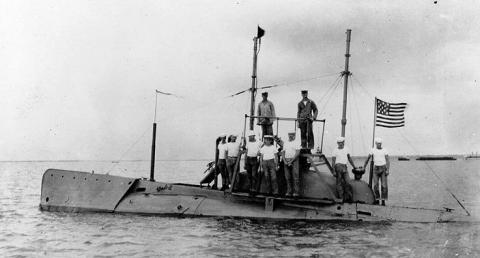 Nearly two decades after the Navy began distributing t shirts as undergarments, the University of Southern California did the same– this time, to their football players, whose skin was chafing under heavy shoulder pads. After it became popular for non-athletes to pilfer the shirts, the school began stenciling ”Property of USC” on the shirts– beginning an iconic style that lasts to this day.

Sixteen years later, in 1948, Presidential candidate Thomas E. Dewey appeared on the first political t shirt. Though he lost the race, a new venue of political expression was born. Then, in the 1950s, the t shirt became a bestselling item of clothing for teenagers after it was popularized thanks to Marlon Brando in “A Streetcar Named Desire” and James Deen in “Rebel Without A Cause.” The plain white t shirt popularized by Deen got a splash of color after tie-dye was popularized at Woodstock in 1969, and the t shirt again remained at the forefront of young culture– this time as part of the counterculture movement.

In the mid-1970s, however, possibly the most iconic shirt of all time was born. As part of a campaign to turn around New York City’s image and revive tourism, the “I (Heart) NY” campaign was launched, and the shirt design became the most imitated one in history. Seven years later, in 1984, another iconic t shirt design was created: after Frankie Goes to Hollywood’s hit “Relax” became a controversy due to its adult content matter, “FRANKIE SAY RELAX” shirts grew to be one of the most recognizable shirts of the 80′s.

In the early 1990s, grunge rockers like Kurt Cobain paired t shirts with flannel button downs or cardigans for a defining look that lives on to this day. Ten years later, statement shirts became popular, with sarcastic or subtly humorous statements written across black shirts in white text.

The t shirt remains a popular method of self-expression, and has been embraced as a method of messaging from fashion to advertising to political expression. Come learn more about promotional shirts, or check out our resources section for more fun and interesting t shirt information.