Streetwear Style: The Return of the Sweatshirt 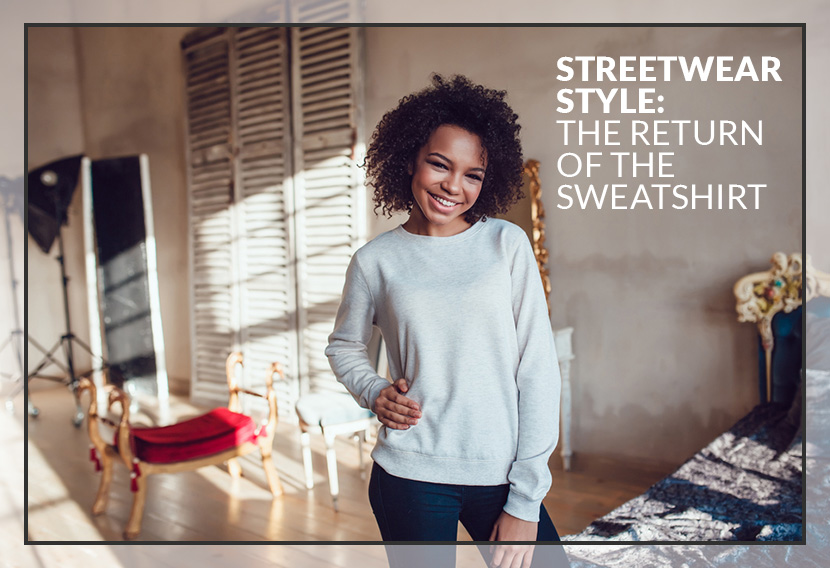 The sweatshirt is one of the most ubiquitous articles of clothing available. Everyone you know owns one. Or at least they should.

It is a casual response to the sweater but comes with so many more benefits. Its snug, sporty style has seen it become the preferred torso-cover item for athletes, college students and fashion trendsetters.

The sweatshirt can be used to make a statement, lose weight, draw attention and even exude certain abstract qualities. What other piece of clothing even compares? Not only is it fascinating to look at, but the sweatshirt also has an interesting history. With fashion trends the way they are, it also has an exciting future. Let’s look at some of this history and a few of these trends.

A brief history of the sweatshirt

The sweatshirt has had an illustrious history, dating back to the early 20th century. Today, almost a century later, it is still a center of fashion attention. All the biggest designers are constantly looking for ways to push the envelope with the sweatshirt. Often, they resort to history for inspiration.

Back in the day, football players used to play in thick wool uniforms. As you can imagine, they were extremely uncomfortable. Always one to take the lead, Alabama Crimson Tide quarterback Benjamin Russell, Jr. decided to do something about it in 1926.

He set out to put an end to the constant chafing and itching caused by woolen uniforms, changing the face of fashion forever. Naturally, his journey began with women’s undergarments.

That’s right. Working with his father (who happened to own a clothing manufacturing company), BR Jr. created a practice jersey modeled on a women’s union-suit top. It was made of thick cotton, which can breathe, as we all know. The Russell Manufacturing Company just so happened to specialize in such materials and designs. 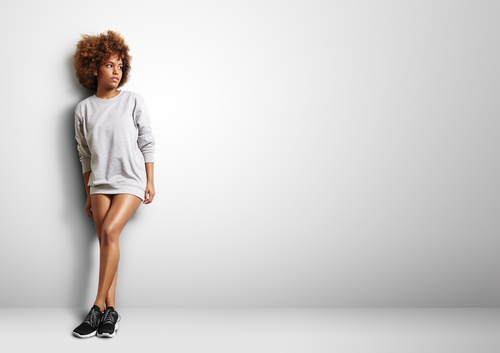 Along with Fruit of the Loom, Russell Athletic forms the core of Berkshire Hathaway’s holdings in this sector of the economy. 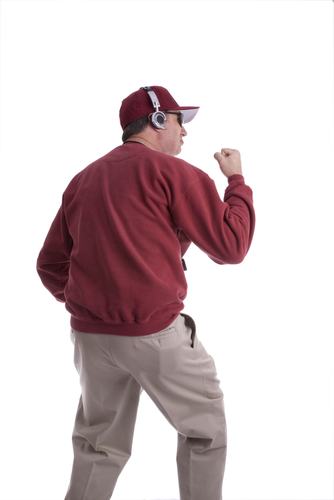 A few decades after it was introduced in football, the sweatshirt started to make waves on college campuses throughout the U.S. The 1960s saw a proliferation of college-name printed sweatshirts. The medium simply caught on.

How much of that is because of the general open-mindedness that pervaded the era, who can really say. In all likeliness, the sheer comfort of the sweatshirt is what birthed its popularity.

Previously, the T-shirt had the monopoly on clothing-based identity broadcasting and political-opinion advertising. The sweatshirt slowly began to take over, at least on college campuses. Together, the T-shirt and sweatshirt would come to define statement-making through clothing from the 1970s or so onwards.

The sweatshirt-as-campus-pride movement continues to this day. In almost every university bookstore, you will find row upon row of sweatshirts emblazoned with the name of the school and in its colors. You can’t really say you went to a college if you’ve never owned that particular piece of merchandise. In fact, they should probably start wearing sweatshirts to graduations instead of gowns.

Soon enough, it became apparent that it wasn’t just students using sweatshirts for self-expression. Designers had started to catch on as well. 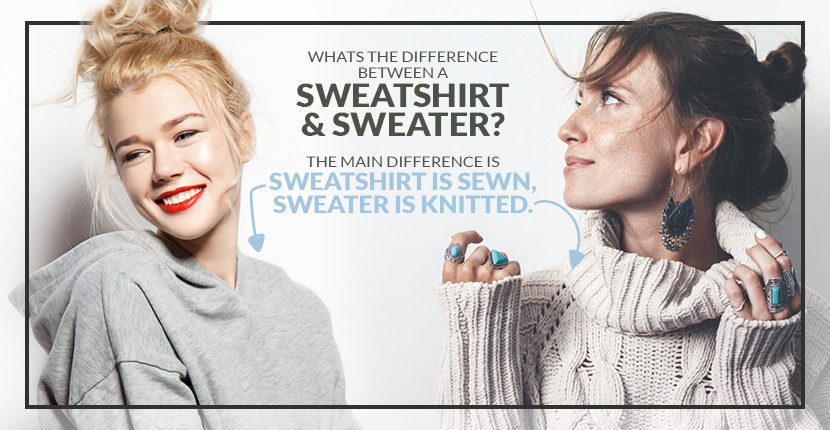 But wait, isn’t it basically a sweater?

This has several ramifications. For one, the sweater’s knit (made of thick yarn) is usually highly visible. The sweatshirt is sewn from a fabric (which itself can be made from a knitted yarn), providing its characteristic feel and look.

What about sweatpants and sweatsuits … and what’s a hoodie?

These are all members of the same loving family. The sweatpant is made in a way similar to the sweatshirt, and when worn together, they form a sweatsuit (or tracksuit). Sweatsuits are usually worn by people trying to lose weight as they exercise, as that the internal layer helps to retain heat, causing excessive sweating.

Sweatshirts can come with a variety of add-ons, with pocks and hoods being the most common. A hoodie is simply a hooded sweatshirt.

Variations on a theme

Whenever designers begin playing with something, you will get millions of variations of it. The sweatshirt has been repurposed in many creative ways since it began taking over college campuses in the ‘60s.

Just as in the ‘60s, the popularity of the sweatshirt is based on its ability to advertise, along with its sportiness and comfort. Various subcultures have adopted the sweatshirt look for these very reasons, from skaters to surfers, hip-hop to grunge. 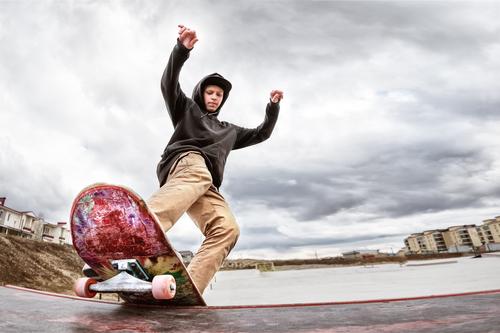 For surfers, the sweatsuit was a source of warmth as soon as you got out of the water. It also absorbed moisture, facilitating drying. As surfing became more popular, the sweatshirt started to appear more often with surfing brand logos, with Quicksilver being the most popular.

Skateboarders like the sweater because it provides extra cushion for hard falls. As skating magazines and video games started flying off the shelves, the sweatshirt became even more popular. The breathtaking visuals of a hooded skater doing an eggplant or grinding on a shopping mall railing captured the imaginations of millions of kids. The sweatshirt was always part of the wave.

Those who couldn’t skate or surf felt just as good merely imitating the clothing styles. For skating, this included baggy pants, a hat, sweatshirt and Vans sneakers.

Boogie down: the hip-hop sweatshirt

Another major cultural revolution that influenced the spread of the sweatshirt nationwide and then globally was hip-hop, particularly the flavor that started blaring from the South Bronx in the late ‘70s. The hip-hop subculture involved more than just music: it was a style of walking, talking, eating and wearing. There was breakdancing and graffiti, the hard knock life and corner bodegas with the ‘40s and smokes.

The dress code was simple: baggy pants, a fitted cap, full of jewelry and Adidas or Puma sneaks. The likes of Run DMC epitomized that original, old-school hip-hop look, which still draws many dedicated fans to this day. The sweatshirt was there all along.

Today’s major designers, from Calvin Klein to Adidas, Fila to Tommy Hilfiger, have all done something with the sweatshirt. Step outside right now, and you are likely to see one of their creations, no matter where you live. You may be wearing a designer sweatshirt as you read this.

The logo sweatshirt is essentially fashion wear for the masses. 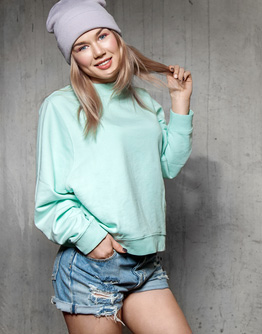 Starting with the Anglomania sailor sweatshirt and designer Norma Kamali’s Sweatshirt Collection, to today’s CK sweatshirts and Dolce and Gabana’s “l’Hip-Hop C’est Chic” (Hip-Hop it’s Chic), there have been numerous iterations of the designer sweatshirt. Today, there are designs for every imaginable taste, from the conservative crew neck sweatshirt to the full zip up hoodie.

Among the truly high-end fashion sweatshirts is the Y-3, co-designed by Japanese master designer Yohji Yamamoto and Adidas. The sleek design evokes both a sportive and cultured feel. Michael Kor’s combined the sweatshirt with a fur vest to produce something that looks like nothing else that came before it.

There are other more daring interpretations. Chloe and Gucci have experimented recently with the head-to-toe full body sweatsuit.

Today’s sweatshirt styles draw heavily on the streetwear craze brought on by skating and surfing. The subsequent hip-hop sweatshirt obsession and Japanese street fashion both draw inspiration from the same hooded source.

Haute couture at its finest is about pushing boundaries, much like the subcultures from which the latest sweatshirt designs get their ideas. The best ideas these days include combinations of style changes and material innovations.

The use of neoprene, leather and satin has been a welcome change. Stylistically, literally thousands of variations have been tried. Essentially, the sweatshirt is the gift that keeps on giving.

The return of the sweatshirt?

The sweatshirt is and always has been popular in one area or another. Its current re-emergence in the area of high-end fashion is nothing short of an earthquake in the fashion world. One could theorize all day about why this happened, but it’s clear (to some of us, at least). Subcultures always set the trend. “High” culture merely latches on.

But what is high culture doing to signal this resurgence of the sweatshirt? They are re-using it as a statement maker. Some of the new items are embroidered, some have satin backs, and others have python patterns or bamboo prints.

There are Sci-fi jumpers retailing at more than $1,000 and others, much cheaper, with statements that poke fun at the whole affair. One sweatshirt reads “Homiès” (a reference to Hermès). Quilting and zippers, which one would never consider new on their own, are infusing fresh life into the sweatshirt design. There is even a move toward retro ‘90s sweatshirts in some circles.

As the basic template is the same (same overall style, often the same material), the true innovation lies in the artwork. That is where modern designers separate themselves into good designers and great designers. People thrive on originality, even if that’s what everyone else is doing.

The return of the sweatshirt is then maybe re-named as its reiteration. The original premise (of being about making unique statements, whether for your university or lifestyle) is being stressed again, albeit this time with sales figures in mind. Great ideas are forged in the fire of competition. 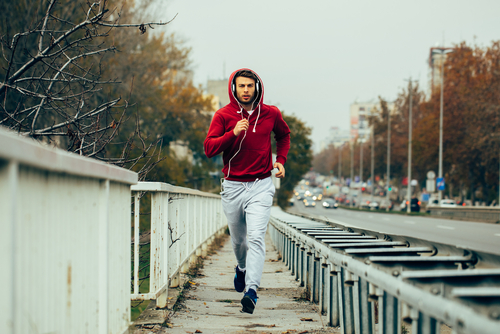 Even though the sweatshirt has never really been out of fashion (which makes it hard to speak of it “coming back”) some items are encountering a plain resurgence. After all, as with anything else, there are trends. The hoodie, for example, is making a slow comeback, after having been out of the fashion limelight for some time.

No doubt in part due to the Black Lives Matter movement, the hooded sweatshirt is becoming the locus for many designers, as they try to reimagine the sweatshirt yet again. The chances are that the ebb and flow of popular trends will see other forms of the sweatshirt come and go in years to come, but there is no sign that the sweatshirt, in general, will leave the public eye.

No other fashion accessory has been so infused with revolutionary zeal as the sweatshirt (perhaps except for Che Guevara’s military beret). Originally, it was used to solve a simple chafing issue in pro football. Over a few years, it found its way into other sports and then into a college dorm. Now it is everywhere, from Main Street to 5th Avenue. It really can’t expand anymore, but only change its form.

Not all form changes are accepted with equal warmth. But whether it is in style or out of style, the sweatshirt is always there somehow. It’s too comfortable, too convenient and has too much character to simply be locked away in the attic of fashion history. The real beauty is that there is still so much that can be done with it. It has been 100 years, but another 100 could pass before we exhaust the possibilities.

Try a full zip up hoodie with no sleeves, lined with fur, or a form-fitting crew neck sweatshirt made from cashmere. What about gloves and underwear made from sweatshirt material? Whatever you do with a sweatshirt, you will look good and feel comfortable. What else could you ask for from your clothes?