3D Printing: The Future of the Clothing Industry 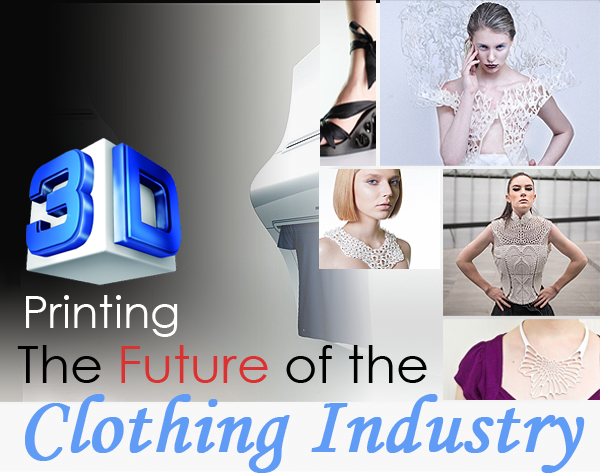 For a while now, there has been much discussion about 3D printing. While it was actually invented in the early 1980s, it didn’t become hugely popular in the mainstream American culture until now. Within the last couple of years, 3D printing has become more than just a hot topic for discussion and dissections; it’s become a reality.

So, what exactly is 3D printing? In laymen’s terms, 3D printing is a process for making a physical object from a three-dimensional digital model. This is typically done by an additive process, which involves laying down successive layers of material until the object is created. Pretty cool, huh?

Printing is no longer a term used to describe the act of placing ink on a sheet or paper, t-shirt, etc. The design or print can now jump off the paper and create something solid. Not to mention, the availability of 3D printing is easier now than it ever was before. In fact, many university campuses across the nation have accessible 3D printing available to its students. If they don’t, they’re well in the works of providing it. As you can imagine, this changes the landscape of many industries.

While we could surely discuss at length the effects of physical printing on any number of trades, the way it’s changing the fashion industry is something that piques our interest. Where is fashion headed? Has 3D printing made its way through all avenues of fashion, or just specific ones? How will the fashion world embrace this new technology? There are many questions and ideas to consider. Let’s take a look into the world of 3D printing and the fashion industry.

How Does 3D Printing Work? 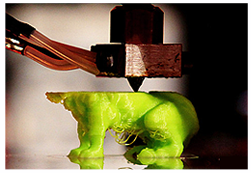 When thinking of 3D printing and the future of fashion, minds are abuzz with all the possibilities. However, before we jump into that, let’s break down the process and how it works according to 3D printing.

As you can imagine, you first begin with a virtual design. Before you can print the solid object, you first have to digitally create the object. When you want to create something completely new, you have to design the object in a Computer Aided Design or CAD file using a 3D modeling program.

On the other hand, if you wish to copy an existing object, you will use a 3D scanner to make a 3D digital copy of that original object. You better believe that these scanners aren’t the ones you’re used to. 3D scanners have a pretty extensive list of equipment used to create the model. Some of the simpler types of technology include: 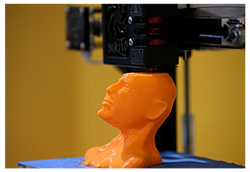 Once you have the file ready to print, the software then “slices” the model into hundreds of horizontal layers, and once the sliced file is uploaded to the 3D printer, the object is then created. The printer reads every slice and creates the physical item by blending each layer so precisely that, rather than seeing visible layers, an actual 3D object is created.

So, what does this new technology have to do with the fashion world? While the concept of printing physical objects – in this case, clothes – would certainly appeal to the customer, what about those who work in the industry? Everyone, from big name fashion empires to the small mom and pop shop that prints your graphic tees, would be affected if this became a viable option for clothing.

So, how exactly would 3D printing change the landscape of the fashion world? While these are hypothetical questions and ideas, it’s worth exploring. 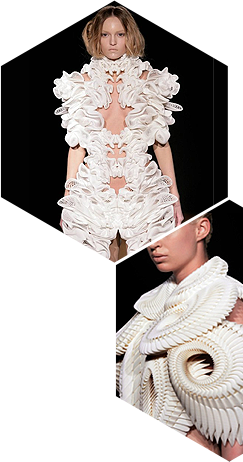 Shorthand for haute couture, this sector of the industry reigns supreme in the fashion hierarchy. These are the big name fashion houses whose clothing comes with many zeroes on the price tag. While the regular Joe or Jane may not be able to buy these items, you can catch these garments walking down the runways.

Couture items aren’t those you could wear while you run errands, and they aren’t designed with that in mind. While some top-notch celebrities might wear these gowns, shoes, and jewelry to big events, they are created with one thing in mind – to make a statement. This often means over the top pieces and items made from different fabrics are involved. Think of these clothes as canvasses the artist (or designer) creates for a show. The designers want to inspire you with their pieces, they want you to feel something, and they want to send you a message.

So, it’s easy to see how 3D printing fits in with this type of scene in the fashion world. Designers such as Iris van Herpen and Nadir Gordon have created haute couture dresses and swimsuits straight from 3D printers. But, one look at the bathing suit, and it’s clear to see this item is not made for the pool.

Rather, those designers who are experimenting with creating clothes using this new technology are doing so to take designs to the next level. The 3D printing software allows designers to create shapes that otherwise would be hard to achieve in the traditional way of manufacturing.

The end result of these 3D couture pieces are certainly stunning, but, aside from the walk down the catwalk, are they made for long-term wear? Is there a way to make comfortable clothing via a 3D printer? 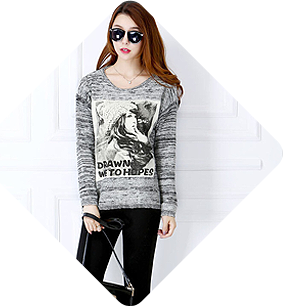 While 3D printed dresses, shoes, jewelry, and other accessories may look great under the dramatic effects of the runway, showroom, or art show/display, what about the real world? Is there a way to select a model and then create a t-shirt with an original graphic using a 3D printer?

Streetwear is a fashion term for garments that originally were made for skaters, surfers, and those who preferred their clothes with a sporty edge. However, as of lately, streetwear has gained a major cult following, and now it has its place solidified in the fashion world. In fact, street style has become even bigger (or just as big) as the runway.

T-shirts, sneakers, and denim are the main staples. So, think of streetwear as everyday wear. The items you are comfortable in, yes, but, more importantly, the person who wears them has an attitude and styles the clothing in a way that turns heads.

Needless to say, most people find streetwear more achievable than couture looks fresh off the runway. This is because, while the runways do offer outfit inspiration, most of the time the looks are created with a design aesthetic in mind. The outfits are often shocking and statement making, and go with the overall theme of the show.

While cutouts, mesh or cage effects, and head turning designs are possible, and the fashion industry has used them before, this just isn’t the right effect for everyday style or streetwear. Until there is a way to produce tees with graphics and other items out of breathable cotton, denim, and other natural fibers, 3D printing won’t be making waves in this sector of the fashion world. 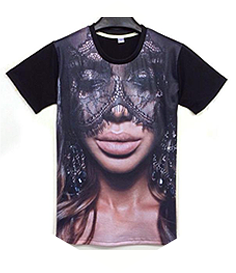 While you still may be skeptical of 3D printed created clothing taking over the runways and fashion blogosphere, there is one aspect of this idea that can’t be ignored nor denied. 3D printed clothing is quite sustainable, because fewer raw materials are wasted when creating these garments. As anyone heavily involved in the fashion world knows, this is not a green industry.

However, with the ability to create and print your clothing without harming a single animal, using gallons of water, or creating harmful pollution, the industry could take on a whole new process. This will obviously appeal to environmentalists, and fashion will no longer leave such a hefty carbon footprint. Obviously, we aren’t quite there yet; however, it is something to consider, as it could very well happen in the future.

Not to mention, if or when we reach a point of printing our clothes rather than buying them, there is another benefit – personalization. Imagine creating your very own clothing and shoes which fit perfectly and are unlike anything else. 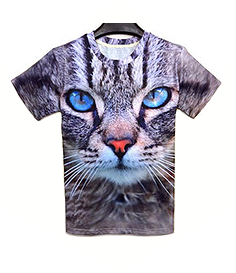 This could be possible, and it would eliminate the need for tailoring or altering a garment to fit you better. You could instantly create the perfect fit. This would be especially helpful for footwear, as many shoes use a common mold, no matter what your foot shape. Which, of course, leads to rubbing, blisters, and other issues for your feet.

Consumers aren’t the only ones awaiting the projected benefits of 3D printing. This benefit applies to those who work in the industry. It’s not uncommon to hear complaints from designers about the long wait times for samples and the huge minimum orders that factories impose (while that might not be a big deal for major brands, for the independent designer it makes life difficult.)

Getting the garments from the sketches to the rack is a long process when you factor in aspects of the process, like sourcing your manufacturer, creating the clothing, and then waiting for the order to ship.

However, that could change with this new technology. With 3D printing, designers will have the potential to produce in the quantities that they believe are best and, more importantly, have the orders filled within weeks. Yes, just mere weeks.

Even more notable: 3D printing will allow designers to make samples quickly. This is a huge concept for the industry, as samples as of now are a long process. Not only does getting the sample now take a while, it’s usually costly. You can see how beginner designers would benefit greatly from rapid prototyping. 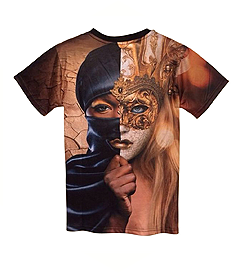 Not to mention, for those small, independent designers (think along the terms of those designers on Etsy) 3D printing will make it that much easier to run their eCommerce shops. The Internet has made it virtually possible for anyone with some skill and a good eye to become an entrepreneur. These designers are able to make something they enjoy doing, are good at, and without the pressure of meeting high volume orders. Think what they could do with access to 3D printers.

While these ideas are exciting to think about, there are plenty of questions and issues that arise out of the hypothetical future of 3D printing and the fashion industry. While it would be awesome to print your own clothing and produce less waste, issues about the design and brand do come about. It’s easy to see the potential problems and legalities that would arise; however, it is still fun to think about the major changes this industry (and others!) might take in the near future.

When it’s all said and done, we are still far away from printing off 3D fabric that is breathable and comfortable to wear. So, don’t get rid of all your clothes just yet! To think that 3D printing will become the norm for everyday clothing is still a far-off concept.

However, as far as couture runway, art, and conceptual design, 3D printing is something that shows signs of sticking around. There are many design schools with 3D printing on their campuses. Not to mention, certain big name designers such as Michael Schmidt (he designed a 3D dress for Dita Von Teese), Iris Van Herpen, and Masha Ma, along with the company Shapeways, have experimented with printing 3D clothing and accessories.

3D printing for fashion is still very much in the conceptual stage and is used for art pieces rather than actual wear. As of yet, 3D printing isn’t taking over the graphic design and printing for everyday clothing. However, don’t rule it out.

The fact that fashion and design schools, along with artists, are experimenting (successfully) with3D printing demonstrates that the technology isn’t going anywhere, anytime soon. If methods advance, it is something that could forever change all aspects of the industry. Designers, brands, and consumers alike will all be affected if the industry makes this switch.