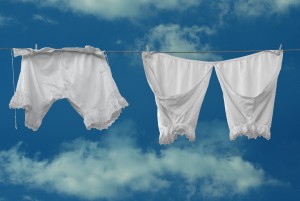 Underwear has not always been worn and the styles have changed many times through the years (though many may argue that going from loincloths the thongs have almost taken us full circle). Let’s take a look at some interesting fact about those items of clothing most of us wear, but not many talk about.

If you survived the underwear facts, congratulations. Now it’s time to act on the information. Don’t be one of those who feels the need to wear the same pair of drawers repeatedly or feels compelled to wear underwear of a type or style that is not to your liking.