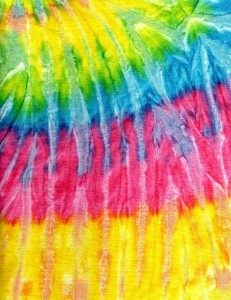 When many think of tie-dye, their minds travel to the 1960s and 1970s hippie movement in the United States. However, the history of tie-dyeing can be traced to pre-historic times. There is tie-dye evidence as far back as the 300s BC, as Alexander the Great mentions in his texts the beautiful dyes he encountered in India. For centuries in India, Japan, and Africa, different tying and dyeing techniques have been practiced using both natural and man-made elements to create both plain and patterned pieces.

Dyes in India have held deep meaning for thousands of years for several reasons. One example still practiced today is that for good fortune, brides have traditionally worn the “Bandhani” saree. The ancient “Bandhani,” or Indian Tie & Dye technique began around 5000 years ago in the Indian states of Rajasthan and Gujarat. Many believe and attribute the Muslim Khatri community of Kutch as some of the first to use this form of dyeing.

It is the oldest method still in practice and is used to make sarees, odhnis, and turbans. “Bandhani” comes from the word “bandhan” which means tying up, the technique that is used to make different patterns. People often wear a unique pattern that identifies them as a member of a particular community. For more information on some of these groups and the history around them, check this out.

The Bandhani techniques have been passed on from generation to generation as a form of art. The patterns are made in very particular ways, depending on how the cloth is tied. In early times, natural elements such as flowers, roots, leaves, bark, and berries were used to make the dyes. Today, both natural and man-made elements are used.
Steps Involved & Resulting Patterns

The area of fabric to be dyed is outlined lightly in the color of choice. Next, a thin sheet of clear plastic is placed on top. This plastic has pin-sized holes over the indicated area, and the color and pattern desired is transferred onto the fabric.
The dyer then finds a spot with an imprint of the hole and pulls a small amount of fabric through, winding thread around the cloth and coming through the hole to form a small knot. After all knots are tied, the fabric is washed to remove the imprints left. After this, the cloth is dipped in a chemical called naphthol for five minutes, and then in a light color dye for another two minutes.

The fabric is rinsed, excess liquid squeezed out, and then it is dried, tied, and dipped again in a darker color. The cloth is left alone for three to four hours as the colors soak into the desired areas, allowing the fabric beneath the threaded knots to remain undyed.
Once completed, the fabric is washed and starched as required. Once dry, the makers pull apart the fabric in a very precise way to release the tied knots and reveal the unique pattern of blank dots beneath them.

The result of this Bandhani tie & dye technique is a beautifully dyed fabric with elaborate shapes and designs, such as flowers and bells. The most common clusters and patterns of knots made from clusters each have their own name.

Just as the patterns of Bandhani dyeing hold deep meaning, so do the colors. Traditionally, only two colors are used at a time. When this type of tie & dye began, the colors yellow and red, which are lucky in Indian culture, were used. In the Bandhani technique now, bright colors such as yellow, red, green, and pink are used in various shades.
While the colors vary in modern times, certain ones still hold huge cultural meaning. Red represents a bride or woman who was recently married, and yellows are used for a new mother.

The tie-dye process finally made its way to American in the 1960s and 1970s during the hippie movement. This rebellious time filled with sex, drugs, psychedelic music, and anti-war protests was an era filled with outlets for self-expression. Clothing became a great way to do this. Designers started using tie-dye, and famous stars began to wear the works to show off their individuality. Tie-dye quickly became one of the major staples of the era and is still used often today.

Want Your Own Tie-Dye?

While the ancient art of Bandhani tie-dye is complex, tie-dye can be a simple and fun activity to create one-of-a-kind pieces. All that is needed are blank articles of clothing and any colored dyes. Some high quality and low priced pieces can be found at theadairgroup.com (as well as already tie-dyed shirts).