The term “tie-dye” first appeared in the United States during the 1960’s.  Hippies, who were protesting the Vietnam War and promoting peace and love, began wearing clothing with vibrant colors and psychedelic designs.  This clothing is called tie-dye.   Tie-Dye T-Shirts and dresses were a symbol of non-violence and their popularity quickly spread among America’s youth.  Not to mention how cool the shirts look.  You can imagine how the design and colors of these shirts stood out in the 1960’s amongst all the bland conservative clothing looks of the time.  If you wore tie dye you stood for something!

Around this time, rock ‘n roll bands started to emerge and their message permeated through this counter-culture.  The most prominent was a band called The Grateful Dead. 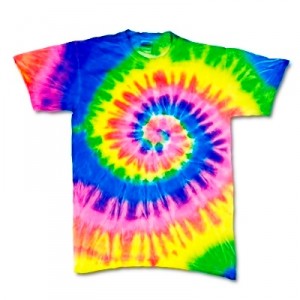 They began playing shows in Palo-Alto, California in 1965 and developed a hardcore lesion of fans known as “deadheads”.  Deadheads would follow them around, city to city, seeing as many live concerts as possible.  Along the way, they had to make money to pay for food and gas in order to get to the next show.   Many of these fans began selling merchandise in the parking lot before and after the Grateful Dead would perform.  The most popular items sold were homemade veggie burritos and tie-dye t-shirts.

Today, the Grateful Dead are no longer performing but tie-dye t-shirts and other tie-dye apparel are as popular as ever!  And these tie dye’s aren’t just worn around the music scene.  Birthday parties, sports teams, school projects- you name it.  Everybody is wearing tie-dye!  Here at the Adair Group, we have over 30 different styles of tie dye and are adding new designs all the time!