VROOM, VROOM, VROOM! It is that time of the year again……Bike Week!!  This is the time of the year when you see and hear thousands and thousands of motorcycles riding through the Black Hills of Sturgis all the way to cruising Main Street in Daytona Beach.  This year the motorcycle rally in Daytona Beach, which just celebrated its 70th anniversary, will be held from March 9th-18th.  You will see every type of bike possible at the 2012 Bike Week in Daytona Beach.  Everything from choppers to drag bikes and race bikes to vintage bikes will be there.  More than 500,000 bikers are expected to attend the 71st annual event in Daytona Beach.  This 10 day celebration has been dubbed the “World’s Largest Motorcycle Event” and it brings every aspect of the motorcycle culture including bike rallies, races, manufacturer displays and stunt shows.    We are fortunate to supply the blank black t-shirts that eventually get printed and become Daytona bike week t-shirts. 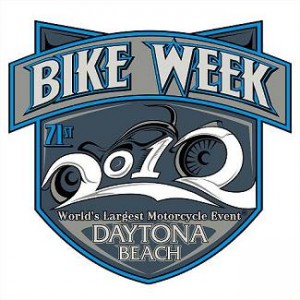 Being from the Midwest, I have definitely ridden a “hog” or two in my day.  I think my first time ever on a motorcycle was when I was probably 9 or 10.  There is nothing like riding down the street with the wind in your hair and the roar of the bike.  Not only do I love to ride, I love the whole motorcycle culture and I have been to Sturgis many times.  It is so much fun!  I have so many awesome biker t-shirts from my experiences at Sturgis Bike Week.  Everyone, and I mean everyone, gets a souvenir t-shirt from Bike Week no matter which one they attend.  I have always, always, always wanted to attend Bike Week in Daytona Beach though!  There has to be nothing better than bikes, the sun and the beach!!  Bike Week in Daytona Beach is one of the biggest biker blowouts of the year and it kicks off this weekend for 10 days of fun in the Florida sun. For ever who is attending the 2012 Daytona Beach Bike Week, trust me you’ll see me there next year!