Ever wondered how the t-shirt came about?  I know I have always been curious so I did some research and here’s what I found.  The t-shirt evolved from undergarments used in the 19th century by cutting one-piece underwear into separate top and bottom garments.  Later on it was coined the name “t-shirt” due to the shape of the garment’s outline.  The beginning of the t-shirt can really be credited to the U.S. Navy.  The U.S. Navy issued crew-necked, short-sleeved, white cotton undershirts around 1913.  It became very common for sailors and marines to wear these comfortable lightweight cotton undershirts under their uniforms.  By the 1920’s the t-shirt had become an official term in the American English Dictionary and by the late 1930’s some U.S. retailers were marketing them, namely Fruit of the Loom, Hanes and Sears, Roebuck & Co.  By World War II both the U.S. Navy and Army we wearing standard issue t-shirts as undergarments.  Following World War II, it became quite common to see returning US servicemen wearing their uniform trousers with their t-shirts as casual clothing. 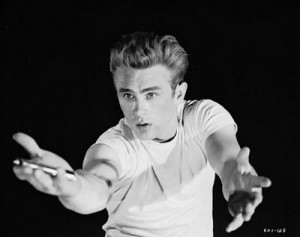 Hollywood definitely had a big impact on the t-shirt.  In 1951 A Streetcar Named Desire starring Marlon Brando is released.  He dons a thin, white t-shirt in the movie.  Teens across the United States go wild for the look and by the years end t-shirt sales total $180 million!  And how could we forget the James Dean white t-shirt in the classic 1955 movie Rebel Without a Cause?  He made wearing t-shirts cool and rebellious!  Tie Dye t-shirts became all the craze in the 1960’s especially in 1969 when advertiser Don Price produces hundreds of the shirts and gives them away at Woodstock. I’m sure we all own at least one tie dye t-shirt!  In the 1970’s the music industry capitalized on the t-shirt when rock bands began selling t-shirts with their slogans and images at concerts.   In the late 1970’s we see the birth of the “I ? NY” t-shirt which are still popular today. I know I have one of them from the last time I visited New York!  And last but definitely not least, in 1984 BBC Radio bans the song “Relax” by Frankie Goes to Hollywood claiming the lyrics are too explicit.  The single skyrockets and the song goes to Number 1.  To flaunt their triumph over censorship the record label owner puts the song’s words in big capital letters on t-shirts, “FRANKIE SAYS RELAX”, which turns thousands of fans into human billboards.  Although the popularity of the band died quickly, the t-shirt still lives on today appearing on everyone from Homer Simpson to Mary-Kate Olson.

Today the influence of the t-shirt reaches every country across the planet and can be used for anything from casual clothing to advertising to souvenirs or even protesting.  The t-shirt has definitely stood the test of time and I’m sure it still has a long way to go! No matter what your t-shirts needs be The Adair Group is here for you!  And remember, FRANKIE SAYS RELAX!