Get Your Mardi Gras T-Shirts!

The term “Mardi Gras” refers  to events of the carnival celebrations, beginning on or after Epiphany and culminating on the day before Ash Wednesday.   Mardi Gras is French for Fat Tuesday, referring to the practice of the last night of eating richer, fatty foods before the ritual fasting of the Lenten season, which begins on Ash Wednesday.  In many areas, the term “Mardi Gras” has come to mean the whole period of activity related to the celebratory events, beyond just the single day.   The festival season varies from city to city, as some traditions consider Mardi Gras the entire period between Epiphany or Twelfth Night and Ash Wednesday.  In some US cities, it is now called “Mardi Gras Day” or “Fat Tuesday”.   Others treat the final three-day period before Ash Wednesday as the Mardi Gras.  There are many popular traditions associated with Mardi Gras including wearing masks and costumes, throwing beads, parades, singing and dancing. 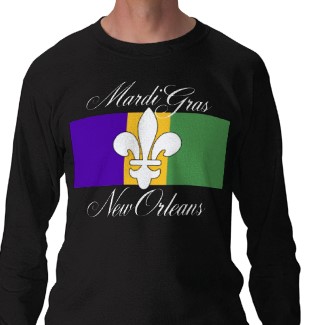 So as the French say, “Laissez les bons temps rouler” or in English, “Let the good times roll”!