How Did Medical Scrubs Come into Being?

Medical scrubs are something that we have all seen, but hardly ever talked about. Even people who wear medical scrubs don’t really know much about their origin story. It is easy to identify medical professionals by the scrub set that they have on when performing their duty. Even in television and in movies, the doctors, nurses, and other healthcare professionals are seen wearing one form of the medical scrub or the other.

In most hospitals, it is mandatory for employees, especially the medical staff, to wear scrubs whenever they are working. The price of scrub sets has come down over the years to the point where they have now become the standard hospital attire. But these scrubs were not always around, and there is a pretty interesting story about how they came into existence and became such an integral part of the medical profession. 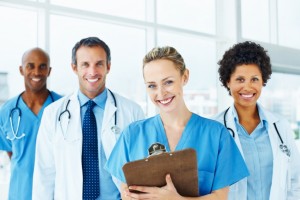 The White Nurse’s Uniform and the Butcher’s Apron

The typical nurse’s uniform is something that we are all more or less familiar with. It is a white garment with a red cross, complemented by a white hat. This stereotypical image of the nurse has been around for centuries. Compared to that, the creation of a scrub uniform for medical professionals is a pretty recent invention. In the early years of medical surgery, doctors would practice in their regular street clothes. In certain cases, a butcher’s apron was worn to prevent blood from spilling onto the doctor’s clothes. Back in those days, there was nothing disturbing about the sight of a bloody doctor’s apron. In fact, it was the mark of the doctor’s proficiency and excellence. The more blood you had, the more patients came to you for surgery.

The Transition from White to Green

As time progressed, medical professionals realized that wearing a bloody butcher’s apron was not exactly the most hygienic way of performing a medical surgery. They understood that this practice posed the risk of fatal infection. They felt the need to maintain a sterile medical environment. There was nothing sterile about a surgeon walking around with the blood and guts of another human being on his butcher’s apron.

In an attempt to decrease infections, the doctors from the 1940s began to use operating rooms where they would wear antiseptic gowns while performing surgery. This gown protected their clothing and prevented the spread of infection to a certain extent. The gowns worn by the surgeons were white in color.

Even though these surgical gowns were technically cleaner than the butcher’s apron that was being used previously, they looked a lot less clean because they were doused in bright red blood. For a lot of people, the sight of the red blood against the white surgical gown triggered a disturbing experience. As a result of this, medical professionals slowly switched to the color green, and white aprons became obsolete. The “surgical green” is a pretty decent color for medical uniforms because it blends color much better than white, and it reduces eye strain. 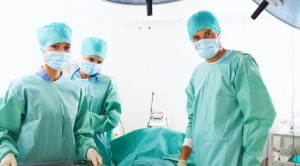 The Evolution of Scrubs

The gowns were not the only thing that became green in color. The color of the entire uniform was switched from white to green. This became known as the standard surgical green uniform. If you take a look at shows from a couple of decades ago, you would notice surgeons wearing the green uniform. As these surgical greens became more popular, people started labeling them as scrubs. The reason for that is because these green uniforms were originally worn by people who “scrubbed in” for surgery.

As the years passed by, the color of scrubs began transforming into different shades of blue and green. Nowadays, there is no standard color or style for scrubs. Medical professionals can wear different styles of scrubs that have varying patterns and colors. You have fun printed scrub tops, solid bottoms, and matching sets on the market.

The change in the color of the scrubs has been complemented by a change in the fabric. As the medical field progresses in skill and technology, we will continue to see the development and evolution of scrubs. They are no longer just used to make blood less visible. Medical professionals wear them for comfort and for creating a style statement.