It’s that time of year again, Superbowl time!  This year, my beloved Atlanta Falcons did not make it, but I am still eager to watch the game.  Super Bowl XLVI will be between the AFC champion New England Patriotss and the NFC champion New York Giants to decide the National Football League  (NFL) champion for the 2011 season. It will be the 42nd annual championship game of the modern-era NFL and is scheduled to be played Sunday, February 5, 2012, at Lucas Oil Stadiumm in Indianapolis, Indiana. Kickoff time is scheduled for approximately 6:30 p.m. EST. 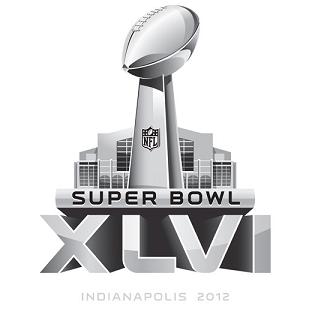 For some people, the most exciting part of the game isn’t even the football.  It’s the commercials!  All commercials for the game sold out by Thanksgiving 2011, at an average price of $3.5 million per thirty-second ad, by far the highest rate for Super Bowl advertising in the event’s history.   At least one thirty-second advertisement commanded a price of $4 million.  I saw a sneak preview of a Honda commercial where Matthew Broderick revises his role as Ferris Bueller, the famous character from the 1980’s hit, Ferris Bueller’s Day Off.  It was really funny!  I am looking forward to seeing that commercial again, and I always enjoy the Coke/Pepsi commercials as well.

Even if your favorite team is not participating in the game, it is always fun to get  souvenir football t-shirts to commemorate the Superbowl each year.  The New England Patriots colors are navy and red, and the New York Giants colors are blue and red.  These color t-shirts are very popular, and of course black and white t-shirts are popular as well.  These t-shirts are officially licensed by the NFL and are only sold at the stadium, or in select retail stores across the country.

I have been asked recently, “Who do you want to win?”  My answer……GO PATRIOTS!